About Emerald Benefits - The preservers of love and removers of heartache. 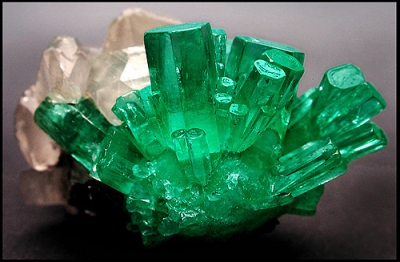 The finest emeralds come from Columbia, but fine emeralds are also found in Zambia, Brazil, Zimbabwe, Madagascar, Pakistan, India, Afghanistan and Russia. Emeralds have also been found in North Carolina and in Yukon, Canada. Synthetic emeralds are also produced. 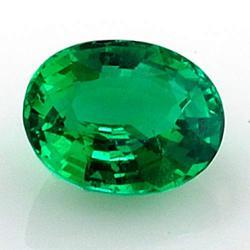 The emerald is associated with the goddess Venus, and is said to preserve love. If you are concerned about your partner remaining faithful, giving him or her an emerald is said to prevent indiscretions. In some cultures emeralds were said to be stones that enable prophecy, while in other cultures they were said to bring reason adn wisdom to their bearer (and perhaps those are the qualities that enable prophecy). The emerald's mystical power is said to be strongest in the Spring. 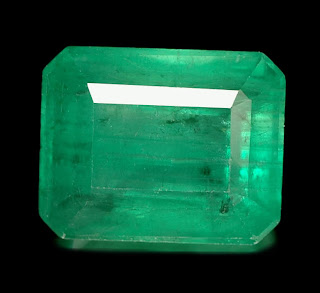 Emeralds are said to have healing properties for the physical heart as well as the emotional heart. Indeed, emotional stress takes its toll on the physical body, but emeralds relieve that stress, allowing healing to occur.
If you are living with the fear of losing your partner's affection, and with the accompanying stress, the deep and vivid healing green of the emerald may soothe your heartache while it works to preserve your love. 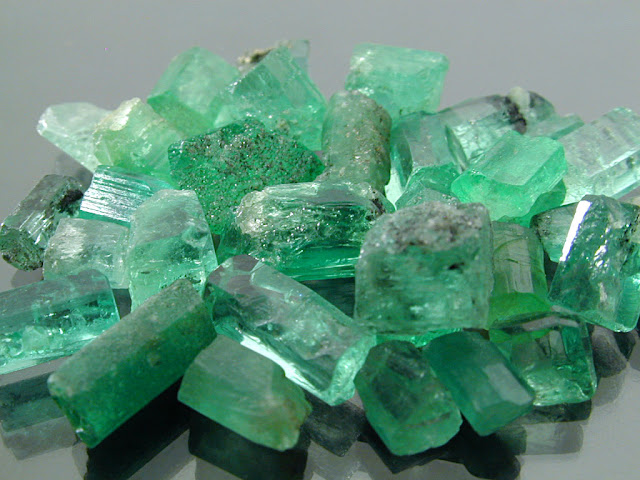 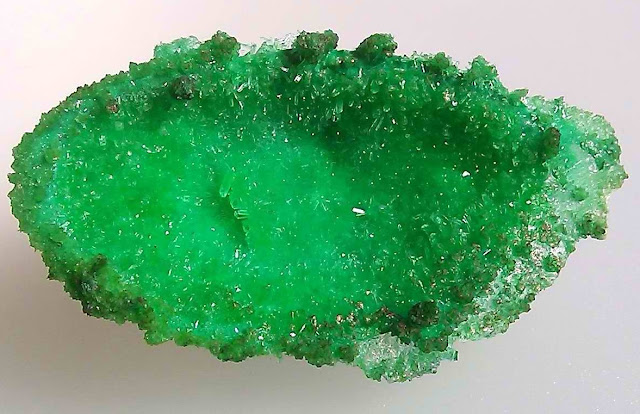 Scientific Properties:
Mohs Hardness of 7 to 8 with a hexagonal crystal structure.

Chemically, it is a beryllium-aluminum silicate whose color is due to small quantities of chromium compounds. The emerald was highly esteemed in antiquity; the stones were used for ornaments in early Egypt where some of the first emeralds were mined.

The proper name for the emerald is beryl, but there are different colors of beryl. Emerald Green is the color as well as the stone. When blue is added to the green, the beryl is known as Aquamarine. Pink beryl is morganite, yellow beryl is golden beryl, yellow-green beryl is heliodor. There is also a red beryl, but it is quite rare.

An emerald of the right shade of green can be more valuable than a diamond. The finest emeralds are found in South America in Colombia, where they have been mined for over 400 years. The gem was a favorite in pre-Columbian Mexico and Peru, where it was cut in intricate designs. The treasure taken back to Spain by early explorers included emeralds.

Good emeralds are the most highly valued of gem stones. India, Zimbabwe, and Australia are minor sources of the natural stones. Synthetic emeralds are also manufactured in Germany, France, and the United States. The Oriental emerald, a different gem, is the transparent green variety of corundum. 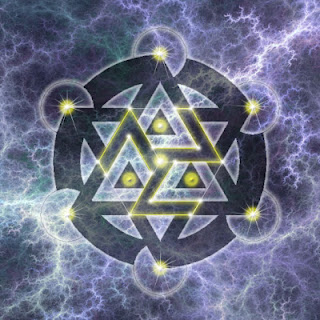 Mystical Properties:
Emerald is a stone of love and romance. It brings and enhances joy, cleansing, clairvoyance, memory, and faith. It also benefits intuition and communication, and promotes truthfulness. Emerald is associated with the heart chakra.

Lucky for love, give your lover an emerald to stay faithful.

In several cultures the emerald was the symbol for fertilizing rain. In the Christian faith it is the symbol of faith and hope. 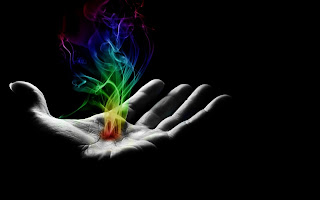 Healing Properties:
Emeralds are known to heal both the physical heart as well as emotional love. They can help backaches when worn on the index finder of the left hand of a healer. A healer may use a ring while the patient lies on his stomach, the healer holding the ring about two inches above the backbone and create small circles, slowly up and down the spine.

The power of the Emerald is highest at the full moon. Some cultures thought the emerald would heal any disease of the eye. The emerald would be placed in a container of water overnight and the water would be poured on the eyes the next day.

Emerald is a stone of great harmony, wisdom and love. Giving your lover an Emerald will bring the lover closer if the giver's motives are pure love. The Emerald can be a bridge between 2 people. The Emerald vibrates with love. 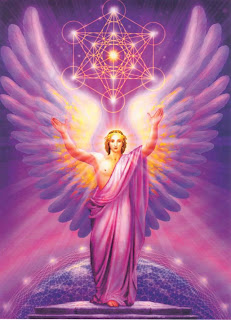 Emerald is known as a tonic for the body as it aids in alignment of all the bodies. Extremely balancing for anyone seeking the truth. Emeralds are said to ward of negativity and to strengthen spiritual insight, and when used as a scrying stone can also foretell the future.

If you would like to bring love into your life, purchase an emerald, charge it with your magical need through visualization, perhaps by using a green candle as well. After the ritual wear or carry the stone somewhere near your heart, but do it in such a way that it can not be seen by others.

Emeralds have been used in spells and rituals for business to promote sales and increase public awareness of the firm. For best results for any magic use, as told and recorded by old magicians, the emerald is best set in silver or copper. An emerald set in a sterling silver ring, for one example is definitely an eye catching piece of jewelry, but the stone married with the metal will also help sensitize the wearer to intuitive ideas and psychic aid, particularly in the field of creative arts. 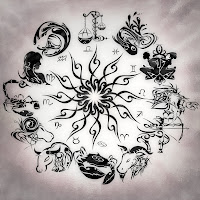 Traditional Birthstone for the Month of May.

Stone of Taurus, Gemini, Aries to dream of an emerald indicates worldly success and goodness, a time of great happiness where you have much to look forward to. 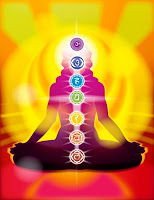 Chakra Classification:
Emerald is associated with the 4th, or Heart Chakra , and the element of air, generates harmony in all aspects of your life.

About Aquamarine Gemstone Benefits: For Protection from Dangerous Forces and the Relief of stress. 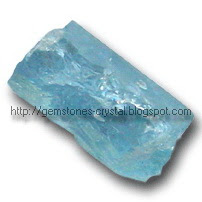 Fact about the Birth-Stone Aquamarine Gemstone.Found primarily in Columbia and Brazil, aquamarine is a lovely blue-green or turquoise colored gem stone that is commonly used in jewelry. Its name comes from the Latin words for sea and water, due to its color which is reminiscent of the ocean. Aquamarine gem stones have a long history, with them said to first be found in the treasure chests of mermaids, according to ancient legend. Even today, aquamarines are considered the lucky gemstones of sailors at sea, that will protect them from the hazards of life on the ocean. It is also said to protect against unseen forces such as malevolent spirits, the evil eye, and the spread of gossip in your absence. 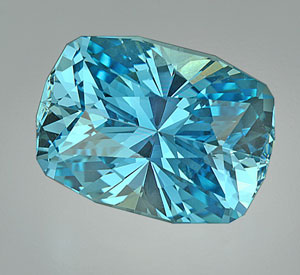 Like the gem stone amethyst, aquamarine is thought to be a purifying stone that improves circulation and mental awareness. And similar to amazonite it has a soothing effect on the brain and nervous system, relieving emotional stress. The removal of this stress improves personal relationships and physical health in turn. 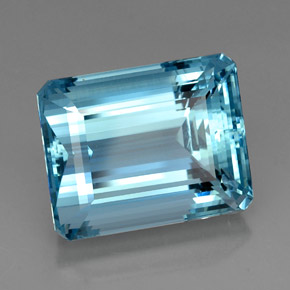 Amazonite's soothing effect also makes it an ideal stone for meditation, as it reduces external distractions and allows the holder to focus on the internal. Similarly, it inspires creativity and artistic flow, since emotional stress and anxiety can inhibit creative output. And naturally, it reduces fears and increases courage, since most fears are irrational emotional reactions caused by stress and anxiety. 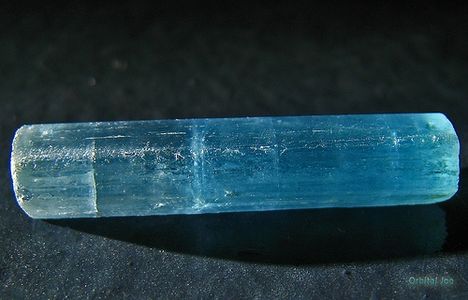 Stress and anxiety are the forces that prevent us from living up to our potential, that inhibit us from being "in the zone" or focused. By relieving that emotional stress and physical anxiety, aquamarine gem stones have the potential to greatly improve our quality of life, both personal and professional.

Aquamarine is said to be the stone of the sea goddesses of past times, due to it's association with the sea. As a semiprecious variety of beryl, it has long been associated with the sea and element of water. Sea Witches are told the cleanse the stone in the ocean water at night by the light of the full moon.

In magic, this glorious stone is worn or carried about the body to enhance the use of psychic powers. Holding a crystal of the aquamarine or wearing a faceted form of the stone around the neck reduces our conscious mind's hold on the psychic mind and allows our ever present psychic impulses to be heard and to enter into our more conscious mind.

A gentle and cleansing elixir can be created by placing an aquamarine in a glass of fresh water, allowing it to sit in the full moonlight, outdoors if possible, for three hours. Retrieve the stone, drink the liquid for purification and heightened psychic awareness. 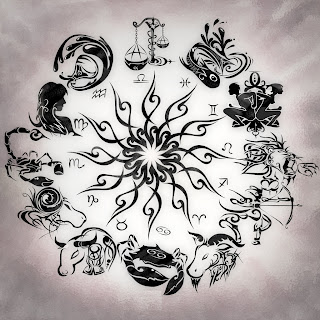 Modern Birthstone for the Month of March, it is an ancient birthstone in many cultures for the month of October.

Stone of Taurus according to some, due to the fact that aquamarine (and the entire beryl family) are of hexagonal (six-sided) crystalline form, and six is a number belonging to Venus. Others say it is connect with Gemini, Pisces and Aries.

For Aquarius the aquamarine promotes friendship and love, while for Pisces it encourages awareness. Libras are warned against danger.

To dream of aquamarine means loving friendships, happy relationships and much pleasant social activity is coming.

Chakra Classification:
Depending on the color, aquamarine is related to the 5th, or Throat Chakra, it is good for meditation as it brings calmness, peace and inspiration with love. It also strengthens personal power and the aura.

When placed on the 3rd, or Solar Plexus Chakra is relaxes the solar plexus and digestive organs.