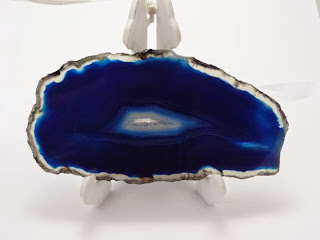 On the outside, agate geodes appear to be nothing but rock, but looking deeper into the interior of a geode will reveal amazing crystal growth and formations. Agate geode crystals are usually composed of quartz or chalcedonic deposits, but various other minerals such as calcite, celestite and dolomite are also commonly found within other varieties of geodes.

Most geodes develop in small hollow burrows within the earth, often created by animals or depressions left by tree roots. The formation begins from a small piece of limestone or anhydrite and over time, mineral-rich waters seep into the burrow allowing the minerals to harden around the small rock. It is through the repetitive series of hardening deposits from mineral-rich waters that eventually form the crystalline structure and outer crust of the geode.

The crystal production that develops within a geode depends on several variables including the amount of moisture trapped within the geode, the various chemicals and rich minerals deposited, and the amount of pressure applied to the geode. If the balance of these variables is just right, crystal formations will begin to grow within the walls of the shell. The crystals build and grow inward towards the center, slowly filling the geode out. The entire process takes millions of years. Many geode specimens have been estimated to be over 250 million years old. Surprisingly, the majority of agate geode specimens are never completely filled out. Geodes with filled out crystal formations are referred to as nodules; nodules composed of agate are referred to as ‘thundereggs’. 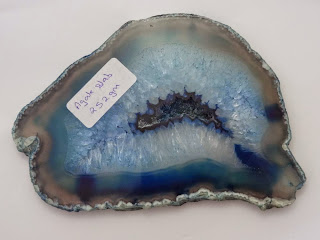 Geodes can also develop within bubbles of volcanic rock. Minerals get trapped within cavities deposited through steam and with each deposit, the various minerals harden and form around a seed rock, typically limestone. Crystal development will vary based on the rate and duration of moisture deposits. If water was deposited slowly and with very few impurities, the geode crust will be finely lined with crystal, but if moisture deposits were rapidly made, the cavity will develop with bands of quartz, usually as banded agate.

Agate Geode Origin and Gemstone Sources
The term ‘geode’ originated from a Greek term meaning "shape of the earth". The name was likely given because of their natural, round earth-like formations, although most occur in oblong or egg-like shapes. Geodes can be found all around the world, but they are mostly located in deserts and volcanic regions. Geodes are especially abundant throughout America including California, Illinois, Nevada, Arizona, Missouri, Kentucky, Utah and Iowa.
Agate Geode Color
Geodes occur in a wide range of vivid colors, depending on the type of crystals within. Typically, geodes contain near-colorless quartz, but amethyst crystals and other colors can also be found. Geode crystals form their own unique pattern of natural facets, which naturally heightens the brilliance, fire and intensity of color. 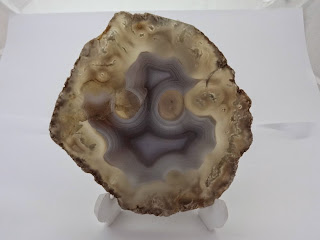 Agate Geode Cut and Shape
Agate geodes typically develop with ovular shape. During the production process, they are sliced open to expose the crystal formation. The crystal-side is cut flat and lightly polished. The rough exterior acts as the base and is left in its natural untreated state.

Agate Geode Treatment
Agate geodes are typically untreated, but some specimens may be enhanced. Even though geodes can occur naturally with bright and vivid colors, if the colors appear too vivid or artificial, there's a good chance they may have been synthetically altered or dyed.

Agate Geode Gemstone Mythology, Metaphysical and Alternative Crystal Healing Powers
Agate geodes carry the same healing powers as all other agate crystals. In addition, most geodes contain other minerals, thus carrying the powers of all minerals contained within. 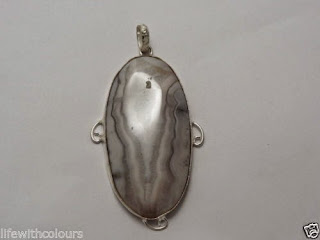 Geodes in general are known to have very strong powers.
Geodes are believed to be able to help see the 'whole perspective' and to see situations from different viewpoints. Agate geodes are also believed to be able to help shape someone's future. They can bridge communications and they are also helpful for clearing one's mind for meditation. Agate geodes are especially powerful in alleviating stress and strengthening spirituality.

Agate Geode Gemstone Care and Cleaning
Agate geodes should be cleaned using plain water and mild soap. Using a soft cloth may not be efficient when trying to clean crevices. A soft brush, such as a toothbrush,can be used to clean geodes but care should be taken to ensure not too much pressure is applied. Do not use any harsh chemicals or cleaners to clean geodes and rinse only with room temperature water. Geodes can also be soaked in water to help soften and remove hardened debris.

I have enjoyed the benefit of crystal healing, but any information on uses and properties included with this listing (which has been gathered from reputable sources, such as Judy Hall and Michael Gienger's books on crystal healing etc) do not, under any circumstances, constitute a claim on behalf of the Seller. The information given is not intended to act as a substitute for medical treatment, nor will any guarantees be given for any spiritual or metaphysical qualities.