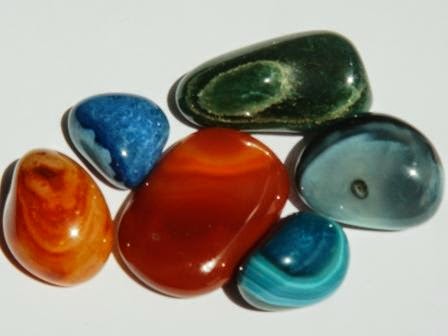 Chemical Composition: Agate is a form of Chalcedony (silicon dioxide.) 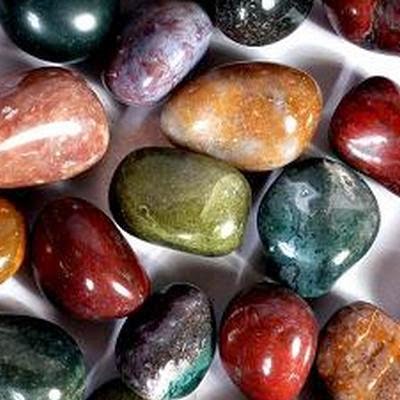 What is an Agate?
Agates are semi-precious gemstones that are a variegated form of chalcedony (pronounced kal-sed'-nee), which is silicon dioxide in the form of microscopic fibrous quartz crystals. Agates naturally develop when an empty pocket inside a host rock fills in molecule-by-molecule, layer-by-layer as these microcrystals self organize to form concentric bands or other patterns. The colors and arrangement of the microcrystals are influenced by changes in pressure, temperature, and mineral content that occur during the formation process. Unlike other gemstones, each agate is unique. Even slabs cut from the same specimen will vary in color and design.

How do Agate form? 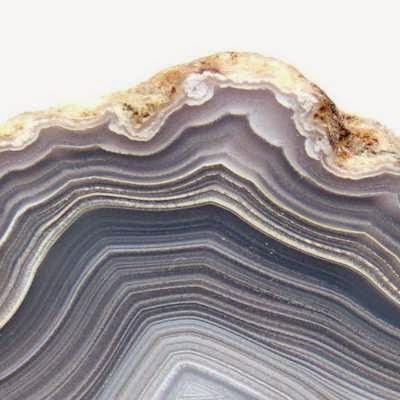 Agates develop as secondary deposits in hollow cavities, called vesicles. Although they can form in all types of host rock, most of the world's agates developed in ancient volcanic lava. When the continents were first forming, layers of molten lava pushed toward the earth's surface through rift zone cracks, volcanoes, and other geologic events. Within the lava, there were pockets of trapped gases. Later, these gases escaped through cracks that formed as the igneous rock cooled and hardened, leaving hollow cavities. Other cracks and seams also formed when adjoining sections of lava cooled at different rates.

Metaphysical Properties:
Agate is a stone of balance, precision, perception and eliminates negativity.

This is THE stone everyone should have for protection. This group of stones are variegated chalcedony. The agate is one of the oldest stones in recorded history.

Agates attract strength. Agate is a protection from bad dreams. It also protects from stress and energy drains. Agates have been used in jewellery since Biblical Babylonian times. They were used to ward off storms. They were prized gems in antiquity. The agates with banded colors were placed at the head of a sleeper to give rich and varied dreams. Agates have been thought to be good to harden the gums.

Metaphysically, Agate has a lower intensity and vibrates to a slower frequency than other stones, but is highly regarded as a stabilizing and strengthening influence. The layered bands of microscopic quartz in Agate may appear delicate, they are actually very strong. Agate is excellent for balancing emotional, physical and intellectual energy, and in harmonizing yin and yang, the positive and negative forces of the universe.

Agate stops the burning desires for things we do not need, and assists those juggling commitments or multiple jobs. It helps writers express ideas in marketable form, and helps young children learn to walk and not fall as they get older. Agate also promotes marital fidelity.

Agate is useful as a protection amulet when traveling, and is especially effective against traffic accidents.

As a professional support stone, Agate stabilizes the imagination and inspiration of artists, provides personal security for police, telephone workers, cooks, chefs and bakers, and protection from falling objects for builders and construction workers. It provides physical strength and endurance for dancers, dentists, and environmentalists, and emotional endurance for educators and recreational workers.

Physical Healing Energy
Agate is used for stomach upsets. Place the agate on the solar plexus. The agate can’t change emotions, but helps to change our level of acceptance of the emotion. Such as when you are very sad the agate will let you know that this will pass and help you get on to another and better day. This is why the Agate is considered as powerful as it gives us the strength to carry on. Carry an agate when you have to make an important decision.

Agate is an excellent stone for rebalancing and harmonising body, mind and spirit.  It cleanses and stabilizes the aura, eliminating and transforming negativity.  Agate enhances mental function, improving concentration, perception and analytical abilities.  It soothes and calms, healing inner anger or tension and creates a sense of security and safety.

Agate is helpful to the heart and blood vessels. Wearing an Agate in the middle of the chest strengthens the cardiac muscle, and heals emotional disharmony that prevents acceptance of love.

A cold Agate placed on the forehead is generally effective in curing fever. (If the fever returns, however, consult a doctor.) Agate may also reduce the symptoms of epilepsy, and for some people guards against sleepwalking.

Emotional Healing Energy
Agate encourages a sense of reality and pragmatic thinking. Agates with regular designs soothe those who desire peace and harmony, while those with irregular designs can stimulate action and important decision making.

Agate is beneficial in self-analysis and uncovering hidden circumstances that might interfere with well-being. It promotes self-acceptance and confidence, encouraging the speaking of one's own truth. Agate overcomes negativity and bitterness of the heart, by healing anger, fostering love, and lending the courage to start over. It is useful for any kind of trauma. 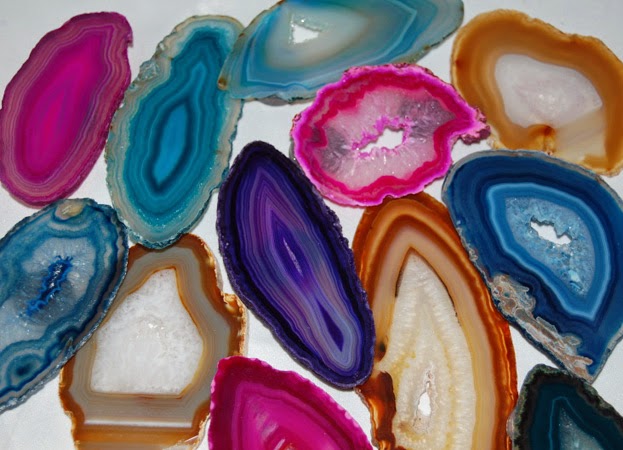 Chakra Healing and Balancing Energy
Agate stabilizes the aura, eliminating and transforming negative energies. Its cleansing effect is powerful at all levels.

Spiritual Energy
Agate raises awareness and links into the collective consciousness of the oneness of life. It encourages quiet contemplation of one's life experiences that lead to spiritual growth and inner stability.

Color Energy
Agate is formed in nearly all colors, from clear transparent crystals, to banded stones of earthy hues. See individual Agate pages for the uniqueness of these gems, and for their specific color energies.

Meditation with Agate
Agate provides a wide variety of crystal formations conducive for meditation focus. The intricate movements within the crystal encourage calm, relaxing state and open the mind to higher thought and inner truths.

Agate Divination
The Divinatory meaning of Agate: Consider both sides before making a decision.

Dreaming of Agate signifies a journey.

You may like the other post for cleaning of crystals:
•    How to clean the crystals
For purchasing any products:
•    Agate Products

Disclaimer:
The above details about the crystal stones is taken from the different varieties of crystals books such as :
Author Judy Hall  - Crystal Bible 1, 2, 3
Author Robert Simmons & Naisha Ahsian - The Book of Stones
Author Katrina Raphaell - Crystal Enlightenment
Author Cassandra Eason - The New Crystal Bible
Author Dorothee L. Mella - Stone Power II
Author Michael Gienger - Healing Crystals
As I love the crystal and so I keep wonderful collection of crystal related books and taken from that.
Posted by Kalpesh Dave at 11:45 PM