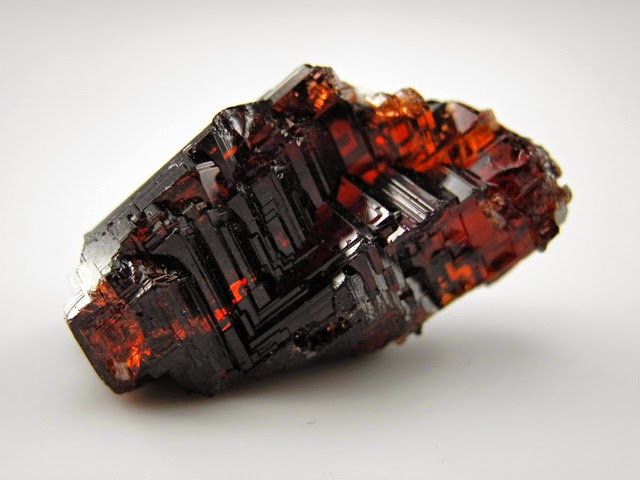 Introduction to the Meaning
Garnet is found the world over, and though commonly known to be red, it is in fact found in a variety of colors and chemical formulas, each with its own set of spiritual properties. Legends and folklore place garnet among the most ancient of talismans. Not only was it prized as an ornamental jewel, but its strong curative powers and protective energies made it invaluable.

Garnet is also known for its utilization of creative energy. It grounds spirit forces within the body and helps in the ability to work lovingly on the physical plane. Yet Garnet is a sensual stone. It represents primordial fire, the creation of the world out of chaos, purification and love. It is a stone of strong, intense feelings.

The distinctive title Garnet is derived from the Latin name Granatum, a pomegranate, because of the resemblance the granular varieties of Garnet bears to the seeds of that fruit. Garnets vary in size from a grain of sand to the size of an apple. According to the Roman historian Pliny, the large dull-colored "Carbunculus of India" (a variety of Garnet) used to be hollowed out into vessels which would hold as much as a pint.

Garnet is said to have been one of the twelve stones in the Breastplate of the High Priest, and has been used as a sacred stone by the Native American Indians, the South American Indians, the Aztecs, the African tribal elders, and the Mayans. It acts with speed to expand one's awareness due to the flash of lightening contained within, and enhances one's internal fire to bring creative powers to implementation.

Garnets whose color suggested that of blood, were not only believed to confer invulnerability from wounds, but some Asiatic tribes launched garnets from their sling bows, and later as bullets, the principle being the blood-colored stone would inflict a more deadly wound than a leaden bullet. Such were used by the rebellious Hanzas, in 1892, during their hostilities with the British troops on the Kashmir frontier, and many of these precious missiles were preserved as curiosities.

Today, Garnet is not only worn ornamentally as a beautiful gem, but is used widely in industrial markets, from watch gears and scientific instruments to sandpaper and abrasives.

Physical Healing Energy
Garnet is thought to have medicinal abilities to reduce body toxins. At times stones were placed in wounds to help heal by encouraging the clotting of the blood.

Garnet regenerates the body, stimulating metabolism. It treats spinal and cellular disorders, purifies the blood, heart and lungs, and regenerates DNA. It assists assimilation of minerals and vitamins, including iodine, calcium, magnesium, and Vitamins A, D, and E. 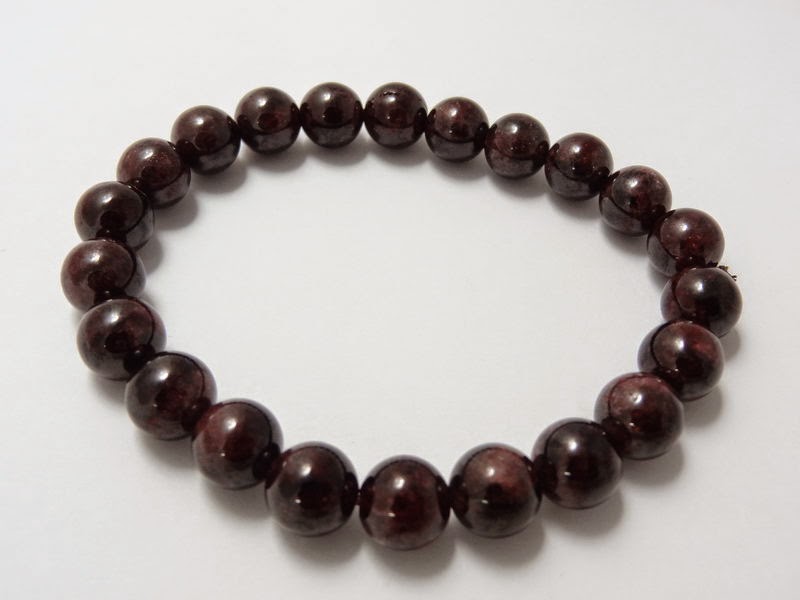 Garnet can alleviate acne, low libido, and disturbances in the cardiac rhythm (except for arterial hypertension, which Garnet can even aggravate). It has been reported to relieve rheumatic and arthritic pain and some psychological illnesses.

Emotional Healing Energy
Garnet provides a protective influence and a calming stable vitality during use. 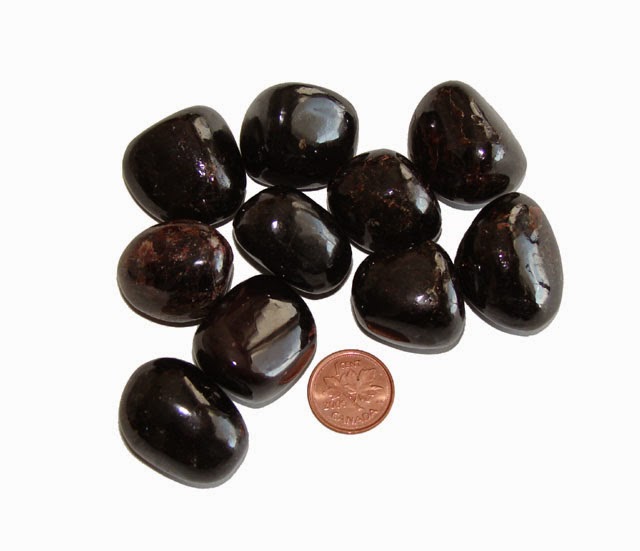 It is thought to heal emotional problems. Placed under a pillow, Garnet is reputed to alleviate bad dreams. Medicine men used it to cure mental depression.

Garnet is useful to have in a crisis, particularly in situations where there seems to be no way out or where life has fragmented. It fortifies, activates, and strengthens the survival instinct, bringing courage and hope into those situations. Crisis is turned into challenge under Garnet's influence and promotes mutual assistance in times of trouble.

Garnet can act as a strong help to balance the energy system, stimulate desires and uplift your attitude. As a balancer stone, Garnet can prevent fears of insecurity and even money losses. They're lucky stones: lucky for love, success, and for goals. Use Garnet to increase your positivity and popularity, thus enhancing your personal self-esteem. As an energy stone, it can encourage success in business and business relationships. It is a wonderful executive gem, especially for women. Square cut garnets are particularly useful in bringing success in business matters.

Garnet has even been credited with aiding widows in finding a new husband. After mourning for too long, Garnet helps to regain the spirit, calming sadness and emotional pain, helping those who have gone through great despair get back on their feet and become seductive again. Perhaps the same could be true for widowers as well.

Chakra Healing and Balancing Energy
Garnet cleanses and re-energizes the chakras. It revitalizes, purifies and balances energy, bringing serenity or passion as appropriate. It inspires love and devotion, balancing the sex drive and alleviating emotional disharmony. Red Garnet in particular stimulates the kundalini energy and aids sexual potency. It stimulates from both the Base and Crown chakras to provide for free flow of movement via the spinal column and the inner pathway of light, distributing the appropriate amount of energy to each portion of the body. 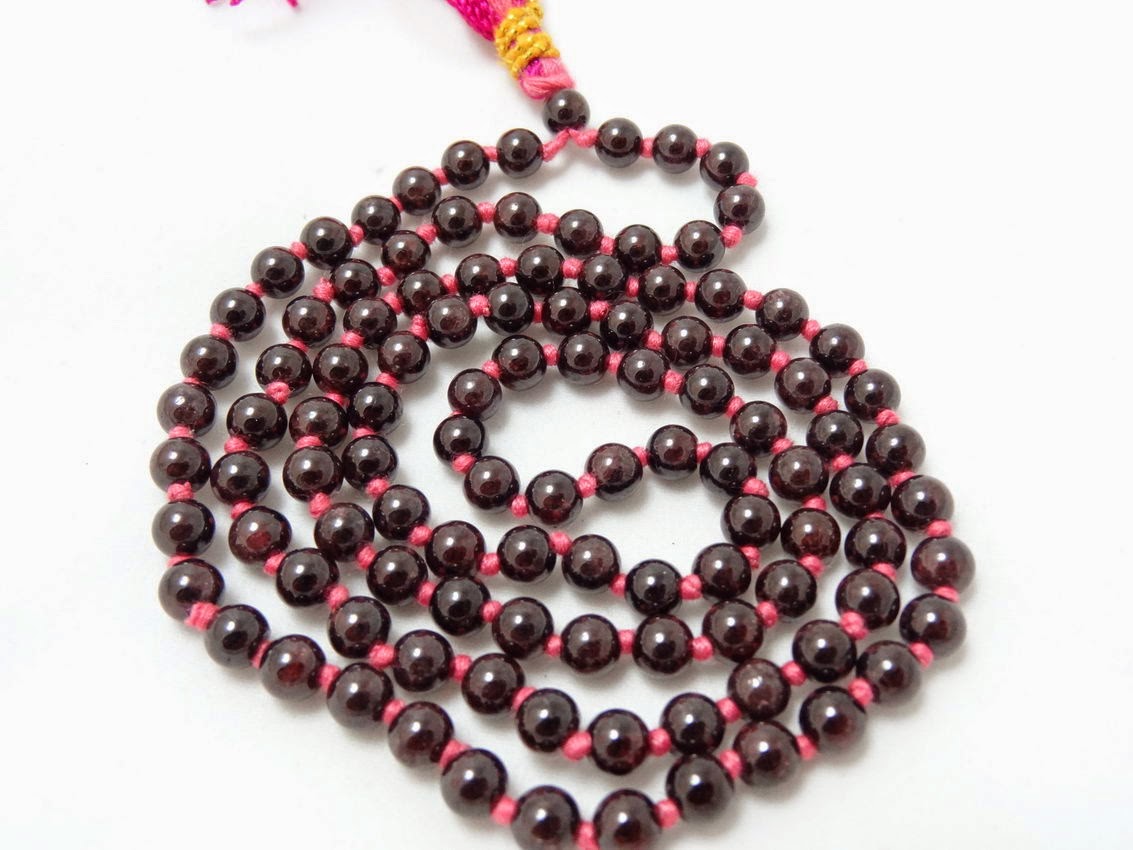 Garnet has a strong link with the pituitary gland and can stimulate expanded awareness and past-life recall. It activates other crystals, amplifying their effect.

Spiritual Energy
Garnet sharpens your perceptions of yourself and other people. It dissolves ingrained behaviour patterns that are no longer serving you, and helps you let go of obsolete ideas. Garnet removes inhibitions and taboos, opening up the heart and bestowing self-confidence.

Garnet is also known as a Stone of Commitment - to purpose, to others, and to oneself. Its loving powers reflect the attributes of devotion and understanding. It both monitors and adjusts the flow of energy to provide for a balanced energy field around the physical body and alignment of the emotional and intellectual bodies.

The above details about the crystal stones is taken from the different varieties of crystals books such as :
Author Judy Hall  - Crystal Bible 1, 2, 3
Author Robert Simmons & Naisha Ahsian - The Book of Stones
Author Katrina Raphaell - Crystal Enlightenment
Author Cassandra Eason - The New Crystal Bible
Author Dorothee L. Mella - Stone Power II
Author Michael Gienger - Healing Crystals
Author Uma Sibey-Crystal Ball Gazing
As I love the crystal and so I keep wonderful collection of crystal related books. I always keep reading and surfing on internet also, so I have gather many information and also done practical experience about the crystal energy.

I have enjoyed the benefit of crystal healing, but any information on uses and properties included with this listing (which has been gathered from reputable sources, such as Judy Hall and Michael Gienger's books on crystal healing etc) do not, under any circumstances, constitute a claim on behalf of the Seller. The information given is not intended to act as a substitute for medical treatment, nor will any guarantees be given for any spiritual or metaphysical qualities.
Posted by Kalpesh Dave at 6:19 PM