Introduction, Benefits and uses of Yantras

What is a yantra?
YANTRA literally means "support" and "instrument". A YANTRA is a geometric design acting as a highly efficient tool for contemplation, concentration and meditation. YANTRAS carry spiritual significance : there is a specific meaning that pertains to higher levels of consciousness. 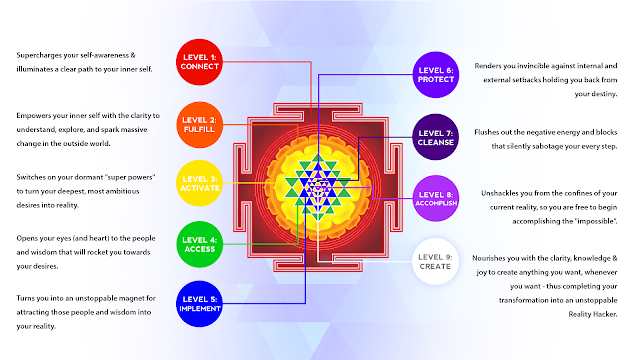 The YANTRA provides a focal point that is a window into the absolute. When the mind is concentrated on a single, simple object (in this case a YANTRA), the mental chatter ceases. Eventually, the object is dropped when the mind can remain empty and silent without help. In the most advanced phases, it is possible to attain union with God by the geometric visualization of a YANTRA.

The YANTRA is like a microcosmic picture of the MACROCOSM. It is a focusing point and an outer and inner doorway. The YANTRAS are often focused on a specific deity and so. by tuning into the different YANTRAS you can tap into certain deities or creative force centers in the universe.

YANTRAS are usually designed so that the eye is carried into the center, and very often they are symmetrical. They can be drawn on paper, wood, metal, or earth, or they can be three-dimensional.

The most celebrated YANTRA in India is the Sri YANTRA, the YANTRA of Tripura Sundari. It is a symbol of the entire cosmos that serves to remind the practitioner of the non difference between subject and object.

How do YANTRAS work?
At the basis of YANTRA operation is something called "shape energy" or "form energy". The idea is that every shape emits a very specific frequency and energy pattern. Examples of old believes in shape energy are the YANTRAS and mandalas of eastern philosophies, the star of David, the five pointed star (pentagon), the Christian cross, the pyramids and so on. Certain 'powers' are ascribed to the various shapes. Some have 'evil' or negative energies and some 'good' or positive energies, but in YANTRA Yoga only the benefic and harmonious energies are used. 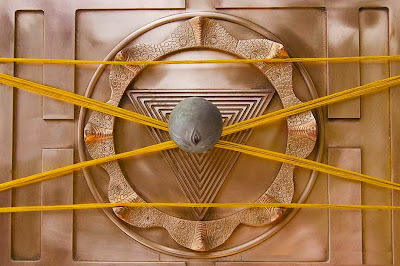 When one focuses on a YANTRA, his mind is automatically "tuned in" by RESONANCE into the specific form energy of that YANTRA. The process of RESONANCE is then maintained and amplified. The YANTRA acts only as a "tune in" mechanism or a doorway. The subtle energy does not come from the YANTRA itself, but from the MACROCOSM.

Basically YANTRAS are secret keys for establishing RESONANCE with the benefic energies of the MACROCOSM. Very often the YANTRAS can put us in contact with extremely elevated energies and entities, being of invaluable help on the spiritual path.

YANTRAS are poorly known in the Occident
At this moment, there is little known about YANTRAS in the Western world. Many people consider them just pretty pictures and some artists claim to draw "YANTRAS" from their imagination. They are very far from the true meaning and use of YANTRAS. First of all, YANTRAS cannot simply be invented from imagination. Every specific mood and emotion has an associated form energy and shape. This unequivocally determines the form of the YANTRA associated to that mood. The traditional YANTRAS were discovered through revelation, by clairvoyance, not invented. One needs to be a true spiritual master, a tantric guru, to be able to reveal a new YANTRA to the world.

Search the Internet and the libraries and you will find very little consistent knowledge about YANTRAS. Some people placed YANTRAS upside down, a monument of their ignorance. You cannot place a YANTRA just any way you please. Anyone knows that when the cross is held upside down, it is no longer a benefic symbol. A YANTRA put upside down is no longer the same YANTRA.

"Disecting" a YANTRA
The power of YANTRAS to induce RESONANCE is based on the SPECIFIC FORM of its appearance. Such a diagram can be composed from one or more geometrical shapes which combine into a precise model representing and transfiguring in essence, at the level of the physical universe, the subtle sphere of force corresponding to the invoked deity. From this point of view we can argue that the YANTRA functions similarly to a MANTRA (sacred word). By RESONANCE, a certain energy from the practitioner's MICROCOSM vibrates on the same wavelength with the corresponding infinite energy present in the MACROCOSM, energy which is represented in the physical plane by the YANTRA. The principle of RESONANCE with any deity, cosmic power, aspect, phenomenon or energy owes its universal applicability to the perfect correspondence existing between the human being (seen as a true MICROCOSM) and the Creation as a whole (MACROCOSM).

The Yantric Contour
Every YANTRA is delimited from the exterior by a line or a group of lines forming its perimeter. These marginal lines have the function to maintain, contain and prevent the loss of the magical forces represented by the core structure of the YANTRA, usually the central dot. They also have the function to increase its magical and subtle force.

The core of the YANTRA is composed of one or several simple geometrical shapes : dots, lines, triangles, squares, circles and lotuses representing in different ways the subtle energies. 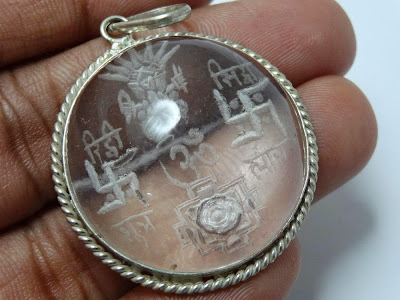 The Dot (BINDU)
For example the dot (BINDU) signifies the focalized energy and its intense concentration. It can be envisaged as a kind of energy deposit which can in turn radiate energy under other forms. The dot is usually surrounded by different surfaces, either a triangle, a hexagon, a circle etc. These forms depend on the characteristic of the deity or aspect represented by the YANTRA. In the tantric iconography, the dot is named BINDU; in tantra BINDU is symbolically considered to be SHIVA himself, the source of the whole creation.

The Triangle (TRIKONA)
The triangle (TRIKONA) is the symbol of SHAKTI, the feminine energy or aspect of Creation. The triangle pointing down represents the YONI, the feminine sexual organ and the symbol of the supreme source of the Universe, and when the triangle is pointing upwards it signifies intense spiritual aspiration, the sublimation of one's nature into the most subtle planes and the element of fire (AGNI TATTVA). The fire is always oriented upwards, thus the correlation with the upward triangle - SHIVA KONA. On the other hand, the downward pointing triangle signifies the element of water which always tends to flown and occupy the lowest possible position. This triangle is known as SHAKTI KONA.

The intersection of two geometric forms (lines, triangles, circles, etc.) represents forces that are even more intense than those generated by the simple forms. Such an interpenetration indicates a high level in the dynamic interaction of the correspondent energies. The empty spaces generated by such combinations are described as very efficient operational fields of the forces emanating from the centeral point of the YANTRA. That is why we can very often encounter representations of MANTRAS in such spaces. YANTRA and MANTRA are complementary aspects of SHIVA and their use together is much more efficient than the use of one alone.

The Six Points Star (SHATKONA)
A typical combination often found in the graphical structure of a YANTRA is the superposition of two triangles, one pointing upwards and the other downwards, forming a star with six points (SHATKONA), also known as David's Star. This form symbolically represents the union of PURUSHA and PRAKRITI or SHIVA-SHAKTI, without which there could be no Creation.

The Circle (CHAKRA)
Another simple geometrical shape often used in YANTRAS is the circle, representing the rotation, a movement closely linked to the shape of spiral which is fundamental in the Macrocosmic evolution. At the same time, the circle represents perfection and the blissful creative void. In the series of the five fundamental elements it represents air (VAYU TATTVA). 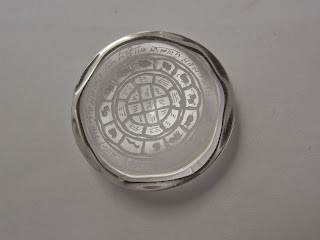 The Square (BHUPURA)
Between the simple geometrical elements that compose YANTRAS there is also the square (BHUPURA). The square is usually the exterior limit of the YANTRA and symbolically, it represents the element earth (PRITHIVI TATTVA).

Even tough most of the times YANTRAS are composed of these simple geometrical shapes, sometimes we encounter other elements such as arrow points, tridents, swords, spikes included in the design of a YANTRA with the purpose of representing vectors and directions of action for the YANTRIC energies.

The Lotus (PADMA)
The lotus symbol (or its petals) is both a symbol of purity and variety, every lotus petal representing a distinct aspect. The inclusion of a lotus in a YANTRA represents freedom from multiple interference with the exterior (purity) and expresses the absolute force of the Supreme Self.

In conclusion, a YANTRA is a very complex spiritual instrument in the tantric practice (SADHANA). It can calm and focus the activities of the mind, and by its positive auto-suggestion it has a beneficent impact on the health and psychic well being of a person.

A YANTRA alone represents nothing. Only when it is awakened by mental concentration and meditation will the process of RESONANCE appear and the benefic macrocosmic energies will manifest themselves in the practitioner's MICROCOSM.

How to Use YANTRAS
As we showed above, the secret key to using YANTRAS in meditation is RESONANCE. The process of RESONANCE is established by mental focus on the image of the YANTRA. 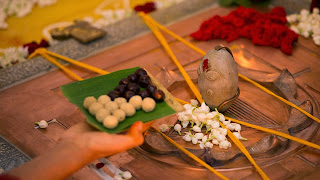 As long as the mind is tuned into the specific mood associated to that YANTRA, the energy flows, but when the RESONANCE is stopped, the energy disappears. 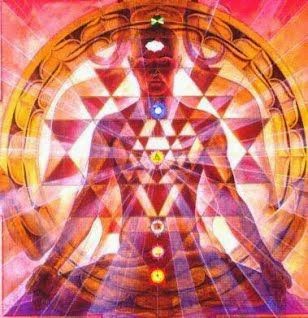 Yantras disclaimer
It is necessary to understand that all yantras are instruments with existing enhancing potential. Although generally, yantras are well known for assisting in attracting desirable or favourable outcome, they cannot force something to happen or manifest that is against one's natural karma from preceding births or those created in this lifetime. Outcomes of Yantra worship are largely governed by the aforementioned factors. For example, if it is not meant to be, one cannot force someone else to fall in love with you, can't force good luck or prosperity to happen at once.
Everything has a season and a rhyme in the scheme of things in the universe. These usually unfold with time. Although sometimes what we wish for, may not happen but take heart that god and goddess always blesses with an outcome that is best for each individual. As universal parents, god and goddess, look over their earthly children in different ways and always with love. When things are meant to manifest for each of us through the use and worship of yantras, these sacred objects of respective resident Yantric deities will help speed up progress.
For purchasing any products:
•   Yantra