Introduction to the Meaning and Uses of Fire Agate 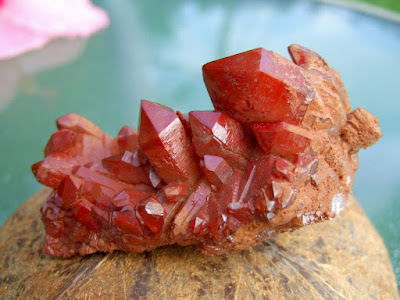 Fire Agate, known as the spiritual flame of absolute perfection, carries a great mystery locked inside its deep brown crystal. You need only touch the stone and fiery embers ignite. Peer into its depths and flames leap within its chambers. Study it closely and it will almost show you its secrets. Almost.

Fire Agate is a variety of Chalcedony, a mineral of the Quartz family. It has a translucent deep reddish-brown base, with flashes of orange, red, green and gold that appears as living flames within the gem. Its iridescent colors are caused by light interference on thin layers of iron oxide or limonite crystals within the Chalcedony.

Historically, Fire Agate was used in alchemy because it was believed to contain the essence of fire. In many traditions sacred to fire deities, it encouraged timid adults and shy children to speak up and not be ignored or bullied. It is a stone of integrity, encouraging high standards of behavior in self and others, and promotes passion in love and in life.

Metaphysically, Agate has a lower intensity and vibrates to a slower frequency than other stones, but is highly regarded as a stabilizing and strengthening influence. Fire Agate provides a steady, vibrant energy that stimulates a zest for living. It awakens the lower chakras and lights one's inner fires of Life Force, creativity, sexuality and will. It brings back to focus the Divine blueprint of one's life purpose and increases the pleasures in everyday life 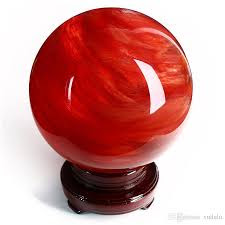 Fire Agate helps manifest Divine guidance through action, and assists one in taking decisive action in unclear circumstances. It increases passion, emotions, and reconnection to one's deepest desires, and provides the courage to take risks to fulfill those promptings. It is ideal to banish the stupor of a humdrum routine, and when one is wearing Fire Agate, it can also stir the emotions of others, sometimes facilitating attraction between mates.

Fire Agate can stimulate sexual and physical energy, increasing stamina and circulation, and is helpful in treating sexual imbalances, including impotence or fear of sexual intimacy.
A stone of creativity and expression, Fire Agate is particularly helpful in overcoming artistic blocks of all kinds.

Fire Agate protects home and family if placed on an outside sill. In the workplace, it is a crystal of ambition and high achievement. As a support stone, Fire Agate is a safeguard over water for airplane and airline workers, and ensures protection around high energy for electricians.

Agate stops the burning desires for things we do not need, and assists those juggling commitments or multiple jobs. It helps writers express ideas in marketable form, and helps young children learn to walk and not fall as they get older.Agate also promotes marital fidelity. 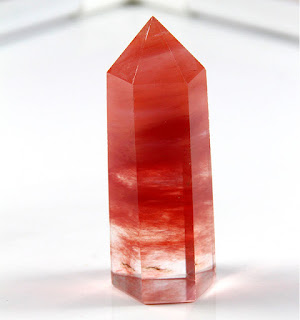 Fire Agate is beneficial in the treatment of poor circulation, lethargy or lack of energy, or depression. Agate enhances mental function by improving concentration, perception, and analytical abilities.

Fire Agate is useful in treating the endocrine system, the colon, and increasing metabolism. It also promotes good night vision.

Fire Agate resonates with the triple-burner meridian and can be applied to bring it back into balance. It is particularly useful in treating hot flashes, and placed on the forehead can help reduce fever.

Placed on the abdomen or used as an elixir, Agate stimulates the digestive system and relieves gastritis. It is beneficial for the eyes, hollow organs such as the stomach, uterus, intestines, etc., and heals skin disorders and itching due to insect bites.

Agate is helpful to the heart and blood vessels. Wearing an Agate in the middle of the chest strengthens the cardiac muscle, and heals emotional disharmony that prevents acceptance of love.

Agate may also reduce the symptoms of epilepsy, and for some people guards against sleepwalking. 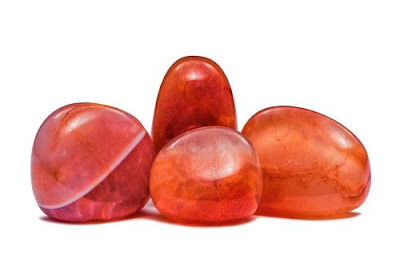 Fire Agate has a deep connection to the earth and brings strong grounding energy. It calms, bringing security and trust, and support in difficult times. Its protective properties build a shield around the body against ill-wishes, returning the harm back to its source, so the source may understand its effects.

Agate is beneficial in self-analysis and uncovering hidden circumstances that might interfere with well-being. It promotes self-acceptance and confidence, encouraging the speaking of one's own truth. Agate overcomes negativity and bitterness of the heart, by healing anger, fostering love, and lending the courage to start over. It is useful for any kind of trauma. 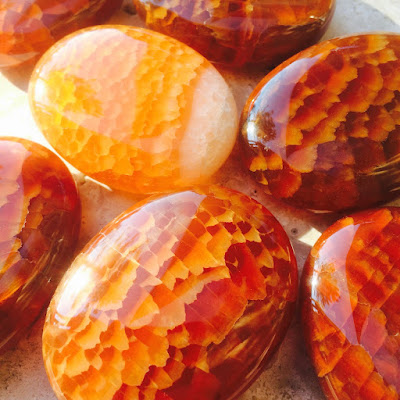 Agate stabilizes the aura, eliminating and transforming negative energies. Its cleansing effect is powerful at all levels.

The brown and red shades of Fire Agate stimulate the Base Chakra. The Base, or Root Chakra, is located at the base of the spine, and controls the energy for kinesthetic feeling and movement. It is the foundation of physical and spiritual energy for the body. When physically out of balance the symptoms will manifest themselves as lethargy, low levels of activity, low enthusiasm, and a need for constant stimulation. When its spiritual energies are out of balance, you will feel flighty, disconnected from reality, and distant. When the Base Chakra is in balance, the physical body regains its strength and stamina, and the spiritual energy is rekindled in the form of security and sense of one's own power. It often leads to independence and spontaneous leadership.

The gold and orange shades of Fire Agate identify with the Sacral Chakra, or Second Chakra, located below the naval and above the pubic bone at the front of the pelvis. It controls the flow of energy and is the center of gravity of the body. It is the center of the Life Force of the body, and controls the flow of information from the body to the mind and from the mind to the body. Gut feelings, intuition, and other "non-linear" communication comes from this chakra. When it is out of balance the symptoms will manifest themselves as confusion, over dependency on others, repression of feelings, inability to feel joy, fear of sensuality or sex, and frustration. When it is in balance you have grace, feel pleasure in life, find you are flexible and can "go with the flow" and do so in good spirit.

The green shades within Fire Agate are associated with the Heart Chakra, located near the center of the breastbone. It regulates our interaction with the external world and controls what we embrace and what we resist. It gives us the balancing ability to be ourselves within the environment. When the heart chakra is out of balance you may feel either controlling or controlled in a relationship, and become critical of the little foibles of others. You may well find yourself having inappropriately strong emotional responses to everyday external stimuli. Green energy resolves blockages and re-balances the heart chakra, helping us understand our own needs and emotions clearly. We can deal with the ebbs and flows of emotional relationships, understand their cyclic nature, and accept the changes. 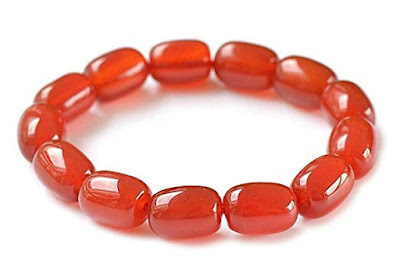 Fire Agate represents the spiritual flame of absolute perfection, dispelling fear at the deepest level of the inner being. It links into the collective consciousness of the oneness of life, encouraging quiet contemplation of one's life experiences that lead to spiritual growth and inner stability.

Fire Agate aligns the etheric body with the physical, grounding and revitalizing the exchange of spiritual and physical energies within the self. The flow and process of this exchange is energizing to the soul as well as the organism. Fire Agate opens the channels of creativity so Divine inspiration can flow into one's activities and expressions. 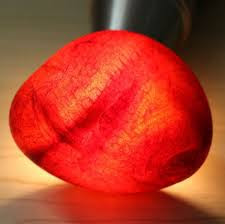 Fire Agate embodies the rich, brown rays of the natural earth. It is the color influence of home, hearth, and nature, of comfort and connection. It lets you relax, reconnect, and regain your composure. It is a grounding stone. Brown crystals promote security and stability.
The red flashes within Fire Agate bring a self-confidence built on fearlessness. It reflects the color of passion, energy, and life. It motivates. It is a very strong color - the color of fire and blood. Dark Red crystals embody strong, deep feelings, durable energy and quiet passion.

The orange flashes within Fire Agate bring joy and friendship, pleasure, and family togetherness. It is a happy and sharing color, integrating the parts of our communal lives, bringing things and people together. Orange crystals embody physical pleasure and intimacy. In lighter shades, orange crystal promotes companionship and affection, while darker crystals deepen the sense of belonging and home.

The gold flashes within Fire Agate bring success, enthusiasm, happiness, and power. It is traditionally the color of kings, riches, and the sun. Gold touches a deep part of our minds, conjuring up images of mystical places and adventure. Light gold crystals provide us with the simple pleasures of life - cheerfulness and contentment. Dark gold crystals have a deeper, more pronounced sense of devotion and commitment, providing us with a mature enthusiasm and ability to share a lifelong commitment of care and love.

The green flashes within Fire Agate are growth crystals - a powerful conduit of the earth's Life Force of birth, development, and creation, and of the power of nature's constant renewal. Lighter green crystals promote spiritual growth and renewed commitment to a higher purpose. Those of a darker hue are talismans of physical growth and strength, and safety in travel. 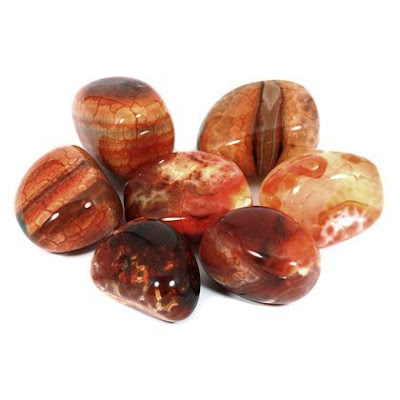 The above details about the crystal stones is taken from the different varieties of crystals books such as :
Author Judy Hall  - Crystal Bible 1, 2, 3
Author Robert Simmons & Naisha Ahsian - The Book of Stones
Author Katrina Raphaell - Crystal Enlightenment
Author Cassandra Eason - The New Crystal Bible
Author Dorothee L. Mella - Stone Power II
Author Michael Gienger - Healing Crystals
Author Uma Sibey-Crystal Ball Gazing
As I love the crystal and so I keep wonderful collection of crystal related books. I always keep reading and surfing on internet also, so I have gather many information and also done practical experience about the crystal energy.
I have enjoyed the benefit of crystal healing, but any information on uses and properties included with this listing (which has been gathered from reputable sources, such as Judy Hall and Michael Gienger's books on crystal healing etc) do not, under any circumstances, constitute a claim on behalf of the Seller. The information given is not intended to act as a substitute for medical treatment, nor will any guarantees be given for any spiritual or metaphysical qualities.
Robert Simmons & Naisha Ahsian, The Book of Stones
Jennifer Altman, Gem and Stone: Jewelry of Earth, Sea, and Sky.
Cassandra Eason, The New Crystal Bible
William T. Fernie, The Occult and Curative Powers of Precious Stones
Michael Gienger, Healing Crystals
Judy Hall, The Crystal Bible 1 and 2
George Frederick Kunz, The Curious Lore of Precious Stones
Florence Megemont, The Metaphysical Book of Gems and Crystals
Dorothee L. Mella, Stone Power II
Melody, Love Is In The Earth.
Katrina Raphaell, Crystal Enlightenment
Robert Simmons & Naisha Ahsian, The Book of Stones
Posted by Kalpesh Dave at 3:20 PM