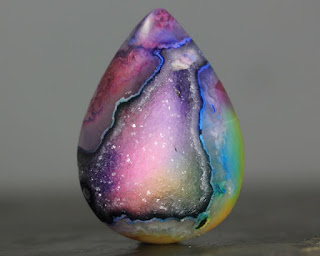 Druzy is the glittering effect of tiny crystals over top a colorful mineral.

Druzy Quartz (also spelt as Drusy or Druse) is a thin layer of quartz crystals covering the surface of a host stone. One good example of Druzy is the crystals filled inside the cavity of a geode. The druzy quartz gems grow slowly over millions of years and are found as the very last layer of growth on agate or another colorful base. It does not always refer to quartz, druzy is any kind of mineral found in a plate-like form, such as garnets, calcite, dolomite and malachite. Common colors are white, yellow, brown, red, and orange. Druzy style beads are great for centerpieces in pendants. While they look sparkly and delicate, druzy quartz is a fairly durable gem.

The term "Druzy" refers to the tiny crystal which is formed within off on another stone in a large number. When the ground water that carries dissolved silica is forced to get filled into a porous area of rock, rapid cooling occurs and it causes the formation of minute crystals. As in Druzy Chrysocolla, the rock is composed of agatized chysocolla with crusts of small sparkling quartz crystals in tiny cavities.

It is beautiful when used in making jewelry. One of the perks to druzy stones is that they are not as expensive as big faceted gemstones and they have sparkle and great color and it can be cut into various shapes with ease. 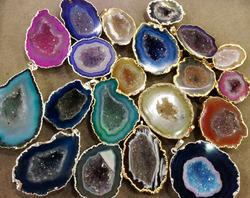 Drusy Quartz is believed to energize and stabilize both your body and aura well promoting creativity. Druzy Quarts is said to aid in balancing and increasing energy. Since ages it has been used to diagnose disease and is believed to enhance natural extrasensory perception abilities. Like other types of clusters, they can empower the energy of other crystals and stones. Placing a stone on the druzy cluster for a day or longer period enhances their energy, especially if placed in moonlight or sunlight for 24 hours.

Geography features of Druzy
Druzy can be found in any location in which there is a place for water to collect and evaporate on rock. It most often appears along river beds and shorelines. It therefore is helpful for collectors, whether commercial or otherwise, to be aware of the minerals common to an area when they look for a particular type of druzy. Drusy is found within the interior of Quartz geodes.

Gemological Properties
Main Features of Druzy
Druzy quartz is made up of many tiny crystals and it has a velvety and soft appearance to it. There can be large formed crystals or many medium crystals with the formation. Treated colorful crystals are sometimes coated with a film of gold, platinum, sterling silver, or titanium. When the Druzy has titanium on it, this adds cobalt, purple, or various rainbow colors. Agates are also easy to dye, so many different shades of backgrounds for the druzy can be made. 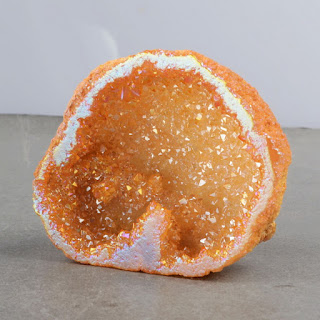 Durability and making of Druzy
Drusy Quartz is rated at 7 on the Moh's Scale of Hardness and is best suited for pendants, brooches, and earrings rather then rings and bracelets because of the concern of the Drusy being detached.

Drusy's are gemstones with a natural surface texture much like fine sugar crystals that formed on the Quartz by the phenomena of micro-crystalline facets millions of years ago. Drusy crystals went unnoticed in the jewelry world until recently, when they began appearing in the work of noted carvers and jewelry designers. The appeal is now starting to grow for Drusy Quartz jewelry as it displays a multitude of tiny crystals with a reflective surface reminiscent of sugar or snow.
Size of Druzy
There are various sizes in this type of crystal there can be very tiny pieces or larger pieces which might be used as display items. The crystals must be cut very carefully as it is easily damaged. The crystal is usually cut fee form to accentuate the beauty of the crystals. In the case of most common quartz material, it is found on the last stages of growth in an agate geode, so pieces are chopped out of the centers of geodes. Some druzy pieces, like garnets, are found as interlocking crystal plates, when found on matrix, they already have a backing, the lapidary artist simply needs to cut out the form and trim off the background matrix to form the cabochon. Vuggy carbonate clusters are often found to have desirable traits, such as the beautiful druzy quartz over sky blue chrysocolla from Peru or the blocks of bright pink calcite from the Democratic Republic of Congo.

Why it so popular
This is a fun and easy stone to work with. The color and flash make it a surefire way to create something beautiful and eye catching. The edges are usually bezel-set do there’s no chipping with the piece of jewelry. You can also use these stones as display pieces because the agate substrate can be polished to show off the mineral layers. 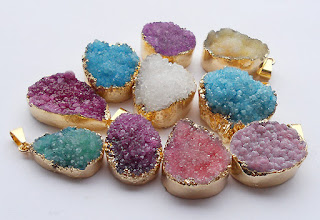 Druzy beads are more like pendants. They are set in a manner that displays the magnificent color and crystal like designs within the beautiful beads. These amazing stones are a result of years of pressure and formation caused by gasses that were trapped as these rocks were being formed and once the rock was solidified, and more minerals were introduced into the rock, crystallizations were formed inside the rock cavity. The colors and crystalline variations are caused by the various minerals present at the formation of the rock. Looking at one of these amazing gems is like looking into a mini universe. Just imagine the time and effort involved in causing this tiny gem that is now here for your enjoyment! 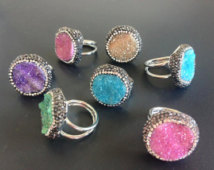 Druzy Titanium is used artistically in jewelry making. The favorites are necklaces, bracelets, rings, earrings and pendants. It has an outstanding luster and is believed to have originated in the US. The usual available color of Druzy Titanium is of golden shade.

Treated and dyed or colored druzy stones
By far the most commonly found drusy is quartz (agate or chalcedony), but many other species can exist in this form. A non ‐ exhaustive internet search yielded the following types: chrysocolla, uvarovite garnet, rainbow pyrite, rainbow hematite, psilomelane, cobalto ‐ calcite, calcite, dolomite, sphalerite, melanite garnet, demantoid garnet, azurite, dioptase, siderite, vanadinite and turquoise. There was even a notation about a drusy pocket found in an iron meteorite! 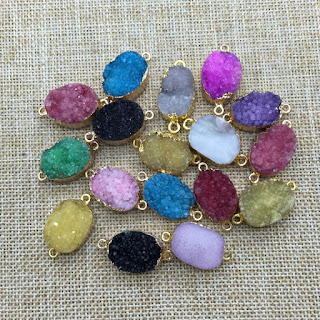 The appeal of drusy material is easy to understand with its multitude of tiny crystals providing a reflective surface reminiscent of sugar or snow. Most none ‐ quartz species of drusy gems, even those with vivid colors like hot pink (cobalto ‐ calcite), day glow green (uvarovite), or multi ‐ Color (rainbow pyrite) Are natural. 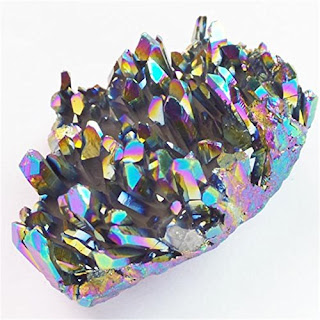 Naturally Colored quartz drusy is found almost exclusively in muted colors such as white, grey, tan and cream. Many Quartz pieces, though, are dyed black or other vivid colors such as purple, red, green and blue, and some are coated with titanium or other metallic vapor which creates various iridescent finishes.

For purchasing any products:
•   Druzy products

I have enjoyed the benefit of crystal healing, but any information on uses and properties included with this listing (which has been gathered from reputable sources, such as Judy Hall and Michael Gienger's books on crystal healing etc) do not, under any circumstances, constitute a claim on behalf of the Seller. The information given is not intended to act as a substitute for medical treatment, nor will any guarantees be given for any spiritual or metaphysical qualities.
Posted by Kalpesh Dave at 5:44 PM